Subject: A Simple Story
Setting: Any
Time Period: Whenever you’d like
Length: Less than 500 words
Restrictions: none
Due: September 30th

Hi Moose. I wanted to show you the idea of a story, with a beginning and an end. I actually took what you wrote and wove it into a story. As you can read, the story has a theme of finding one’s home on the field. It is just a simple story but see how it starts, unfolds and ends. Thank you!!

Martin was only 12 when his grandfather passed away. He never knew his parents so his grandparents had been the only parents he had. His grandmother passed just a few years earlier. But the day soon came when the lady in the suit called on him. Without parental guardians he became what the suit lady referred to as “a ward of the State.” They would force him into foster care with a family he didn’t know. He was lost, desperate and didn’t want to live with anyone else. He cried for days and never came out of his room. His foster parents were nice, but they just weren’t his parents.

This next year at school was difficult for him. He stayed to himself, never talking with the other kids. Why should he. They still had parents and their lives were fine. Only his life had been destroyed and ripped apart. His hopes of playing football at school died with his grandfather who would stay up late telling him of the stories of when he played back in the 1930’s. It wouldn’t stop Martin from wandering around the football field after school, stopping for a while and dreaming of how his life could have been different… could have been fun… could have been… normal.

One day on the field a man called out to him. “You looking for someone?” A thick man wearing a jersey and a whistle around this neck asked. Martin jumped at his voice, not hearing his approach, but he remained silent. “I’m Coach Jackson,” the coach paused, took a breath and sat down next to Martin. “Are you Martin?” The boy looked up surprised and nodded. The coach put his arm around him. “I knew Moose, your grandfather.” The mention of his grandfather brought a smile to his lips. Martin looked up at the coach and saw something in his eyes that showed he truly understood. “Moose was a great man and a terrific player. Are you interested in playing, son?” Martin straightened up, his eyes watering. “Yes! Please, sir. Please!”

The coached hugged him tighter, his own eyes starting to water. “Just call me coach.”

The next year, Martin strapped on the gear and headed out for his first football game. The bulky shoulder pads, the menacing helmet, and the jersey. That jersey meant more to him than anyone could understand. He finally belonged.

Stepping onto the field for the first time was a day he would never forget. Game day, lights on, people in the stands. He could smell the sweet smell of the green grass as it gave way under his cleats. The roar of the crowd all but drowned out the sound of his heart pumping in his chest. His heart raced as he looked around at his teammates. The same boys he had trained so hard with all summer. They weren’t just teammates, they were his family.

Coach Jackson lead his team to the field. The players took their positions. Martin looked up to the people in the stadium and to the players in the field. He felt at home. Soon, the kick off. “This game is for you, grandfather.”

Thank you Grant for getting me started again! It may take some time to brush the rust off but it feels good to write again!!!

My first time on a Football Field.

I was 13 years old the first time I strapped on that gear. The bulky shoulder pads, the menacing helmet, and the jersey. Many people who watch professional sports don’t realize what that jersey means to the player. It means you belong to something bigger than just yourself. That no matter the outcome you fought your hardest for yourself and fellow team mates.

Stepping onto the field for the first time was a day I will never forget. Game day, lights on, people in the stands. You can smell the sweet green grass as it gives way under your cleats. The roar of the crowd all but drowned out by the heart beating your chest and in the chests of the men around you. All beating as one as you rush the field prepared for battle. You feel your pulse rate climb and synchronize with 30 other people. You aren’t just teammates, you are family. One entity working together to destroy an opponent.

Coaches lead their teams in pregame warmups and prayers. Asking God for strength, and forgiveness. Strength to overcome this adversary and forgiveness for what we are about to do to them. Last minute stretches, preparing your body for war. Final preparations made, plays adjusted, equipment checked. You scan the crowd and see hundreds of eager faces willing you to perform, to fight your hardest. Your heartbeat fills your throat.

Kick off. The ball booms through the air and you can hear it slam into a receiver. A small ball made of leather, filled with air, cracks through the air like a bolt of lightning. Pads strike pads as warriors collide. There is no sound like it. The straining and sound of forceful impact. The thunder of footsteps resounds in your core. Shaking your very being down to every fiber. This is it, this is your time. Whistles blow. The Play ends, time to breathe.

Subject: A Simple Story
Setting: Any
Time Period: Whenever you’d like
Length: Less than 500 words
Restrictions: none
Due: September 30th

With the power of the Moose, we welcome Jared Peters!! Let’s start back by dipping into the shallow end. This September, let’s write a simple story of 500 words or less. The story has to have some kind of conclusion… even a cliff hanger. But just don’t go and leave the reader hanging for an ending. 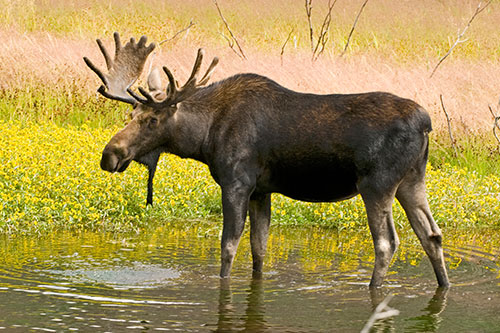